When Hollie decides to quilt on Lolah, she comes armed with a bundle of quilt tops. She makes quilts to sell at Keepsake Crafts in Murray Corner when the shop opens for the tourist season.

All three quilts started with the same panel but each was done a little differently. The batik backing was purchased at the Bargain Fabric Outlet in North Bedeque while on a road trip to the island. It did not come cheap but it was a wide backing. 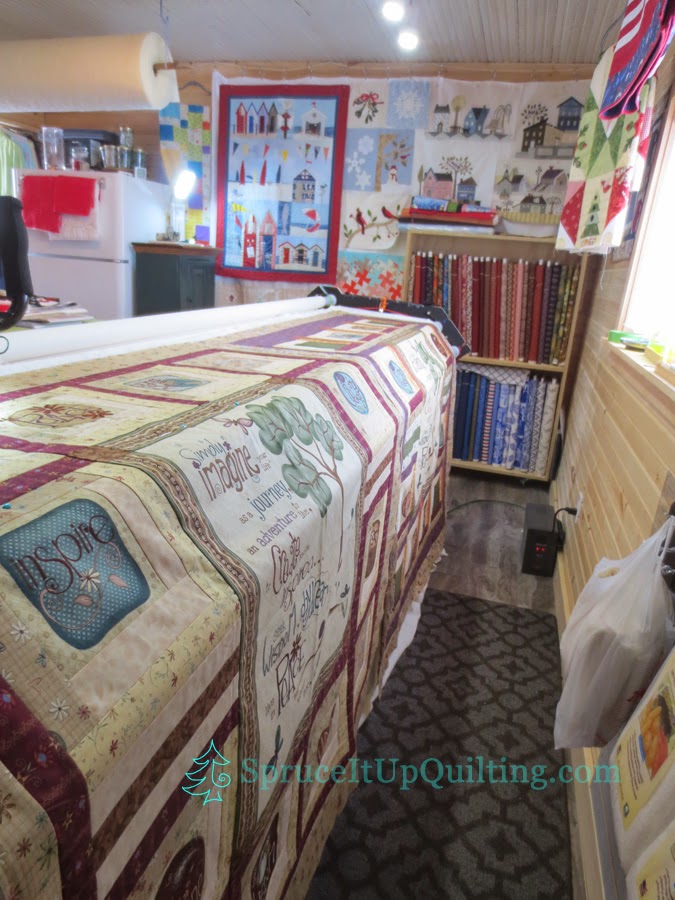 This was Hollie's first time using a pantograph for her quilts. She wasn't too sure she would like it and was worried about the experience... dreaming about it too. 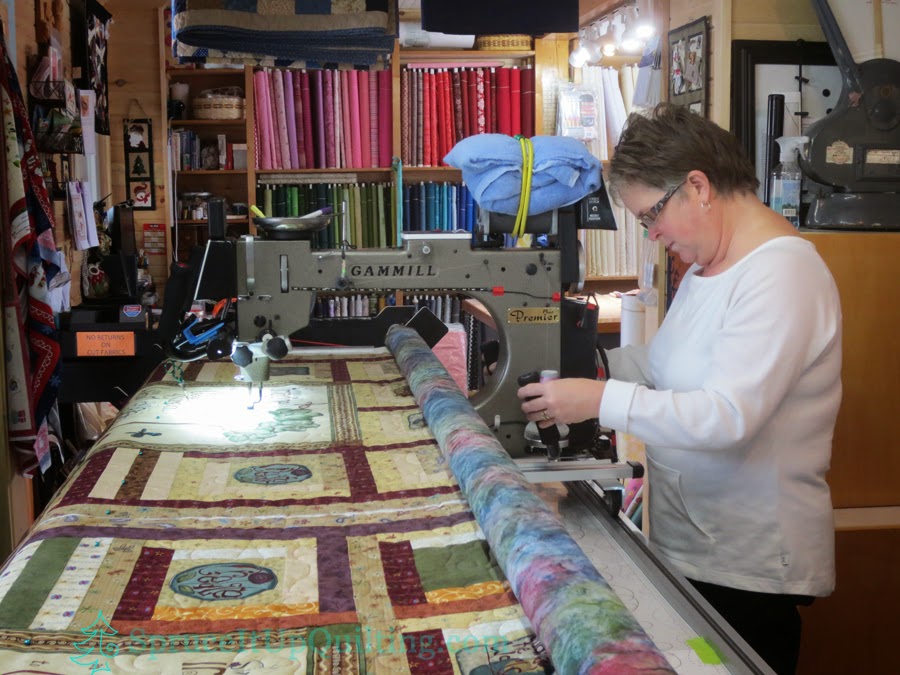 You can see in the photo above that two quilts are loaded close together and the pantograph was worked across both. It requires someone on each side of the quilting bed: one to quilt the panto and one to "spot" making sure the foot doesn't slide under the quilt top as it hops from one to the other. 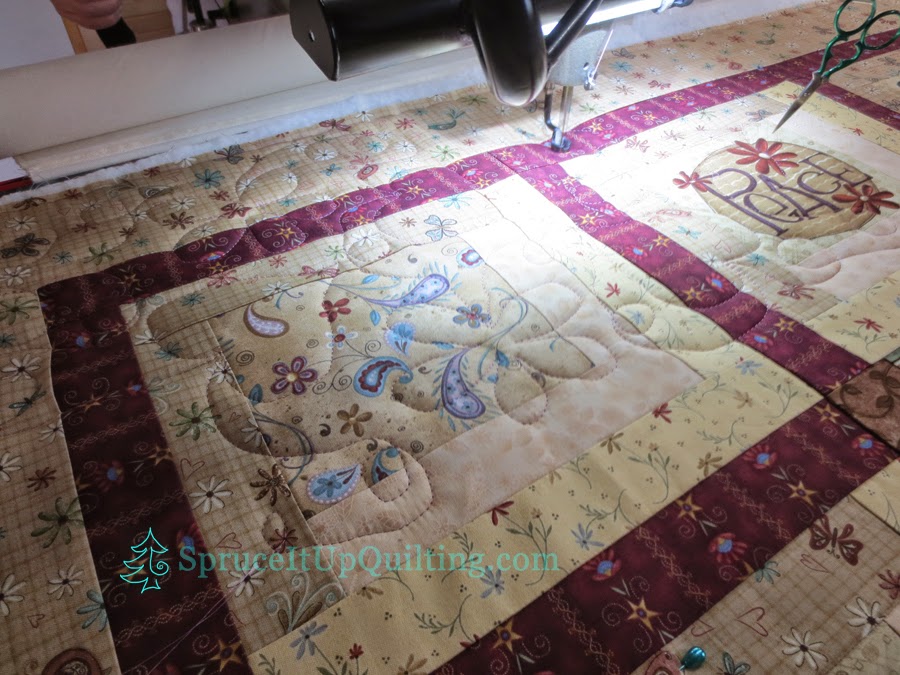 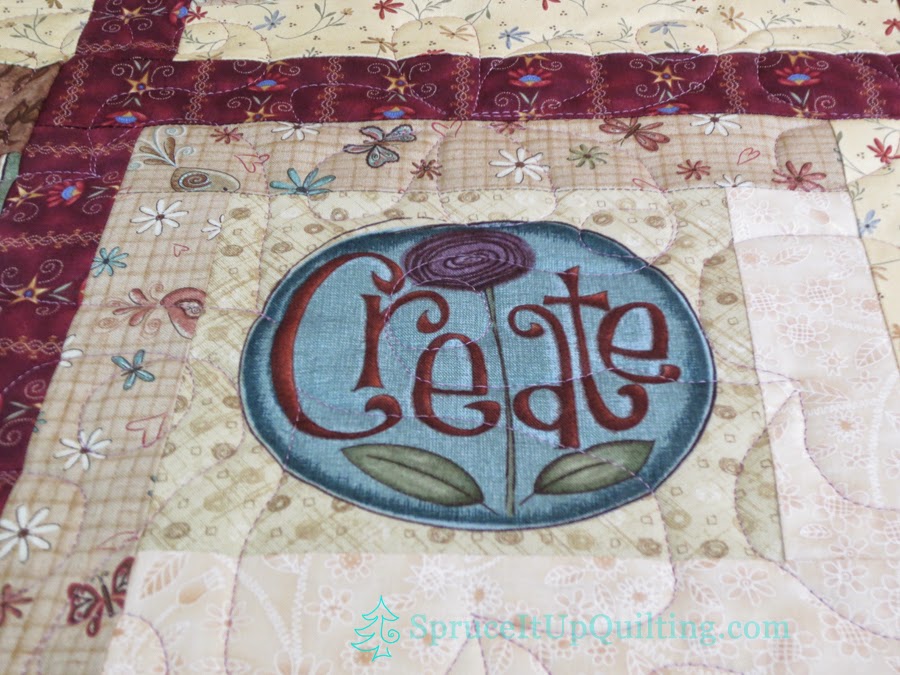 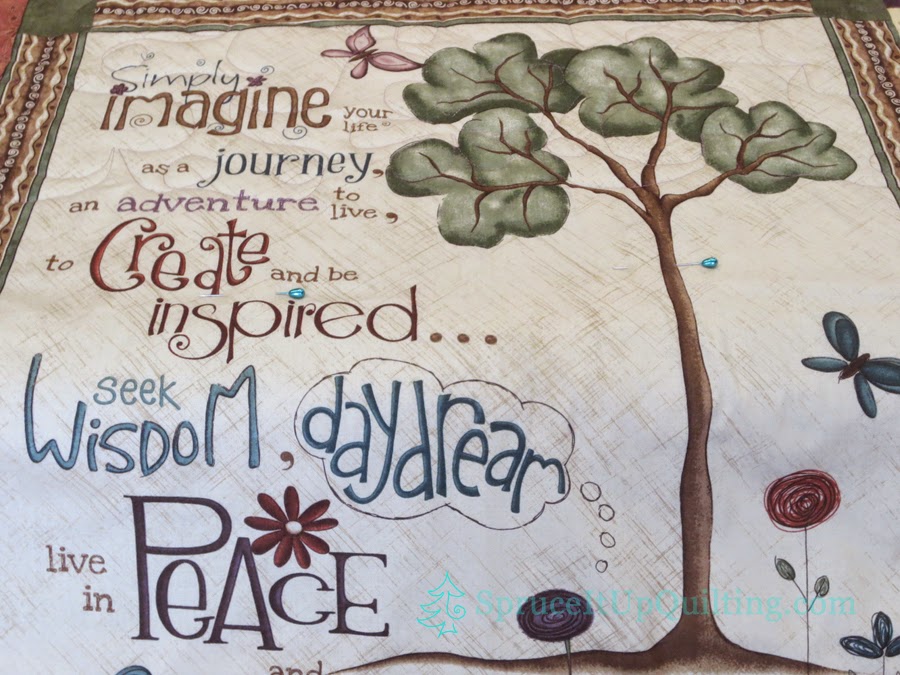 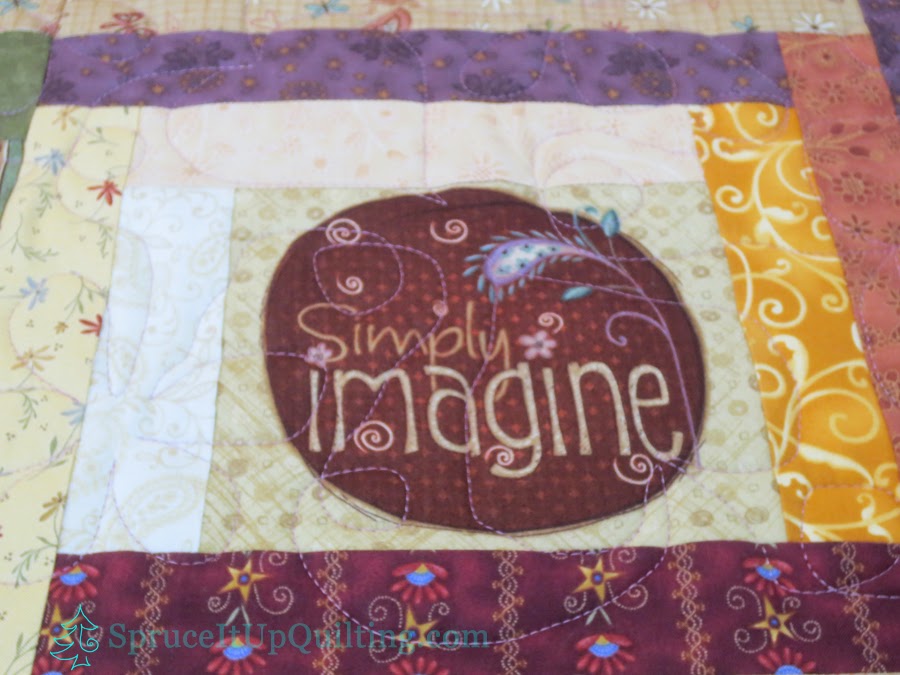 Tea berry Glide which is a pale mauve/pink has been a very popular thread color and one of Hollie's favorites. 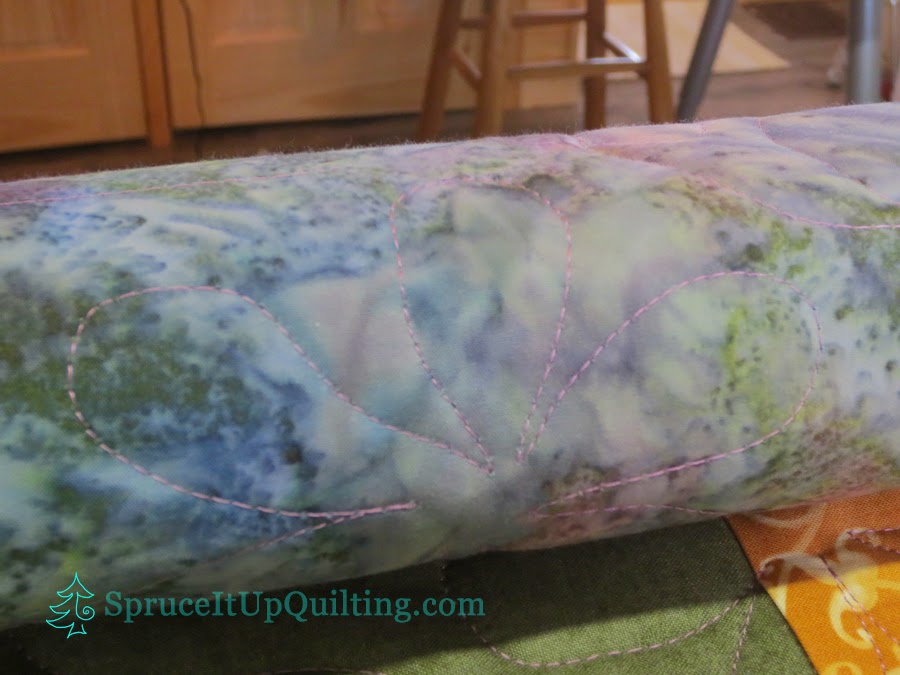 Her husband Micheal came in to check on her progress and was even given a chance to try out Lolah! He did an excellent job! 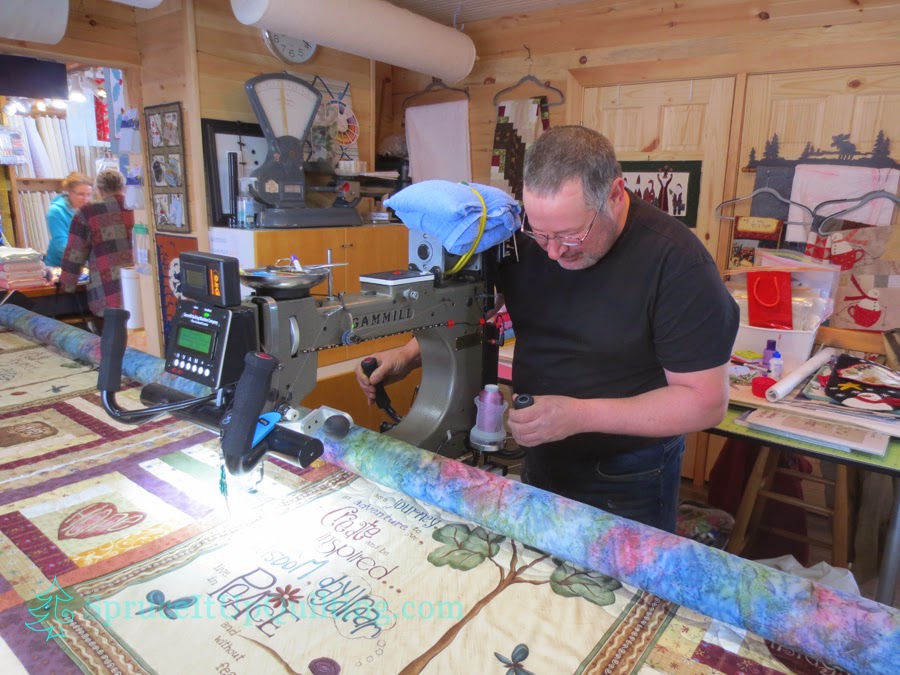 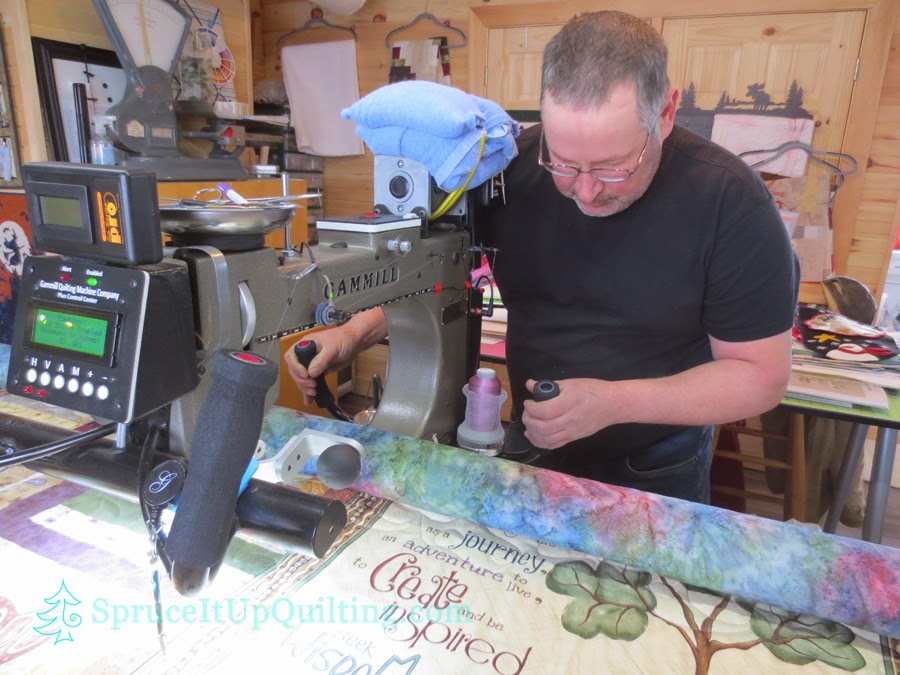 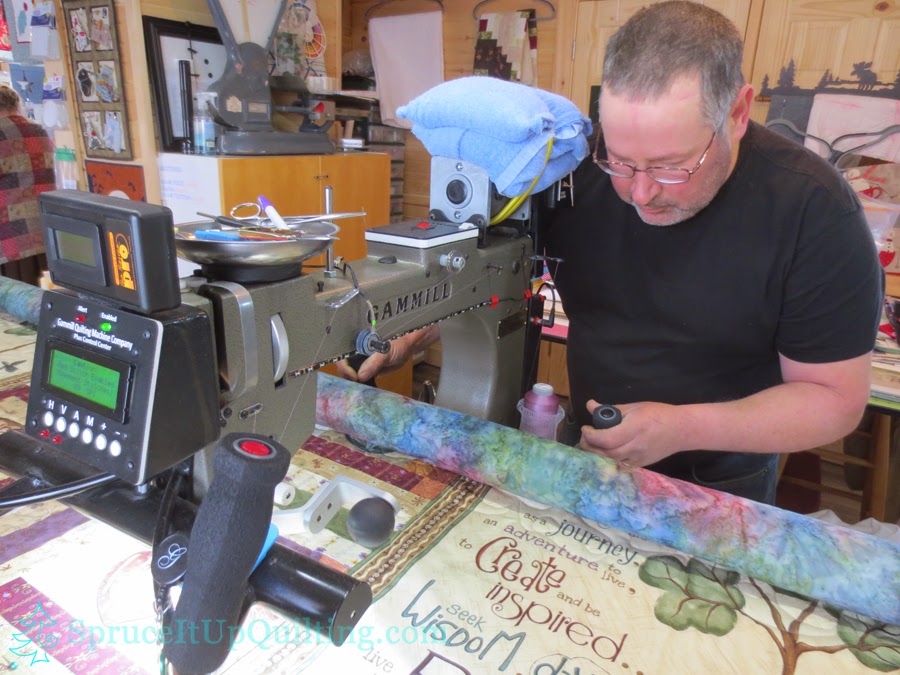 Micheal is a contractor so he has experience guiding hand tools. 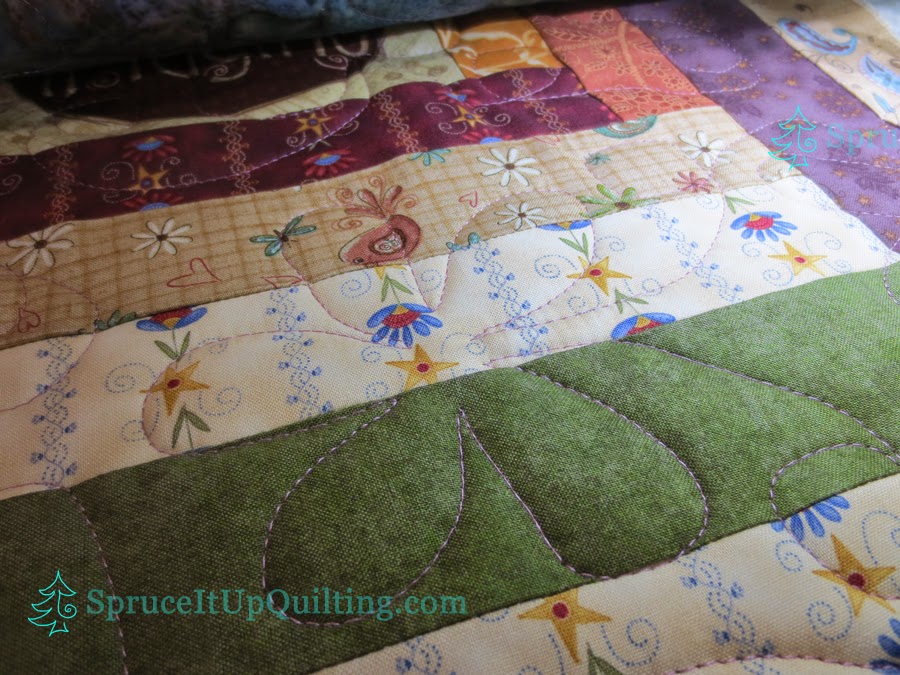 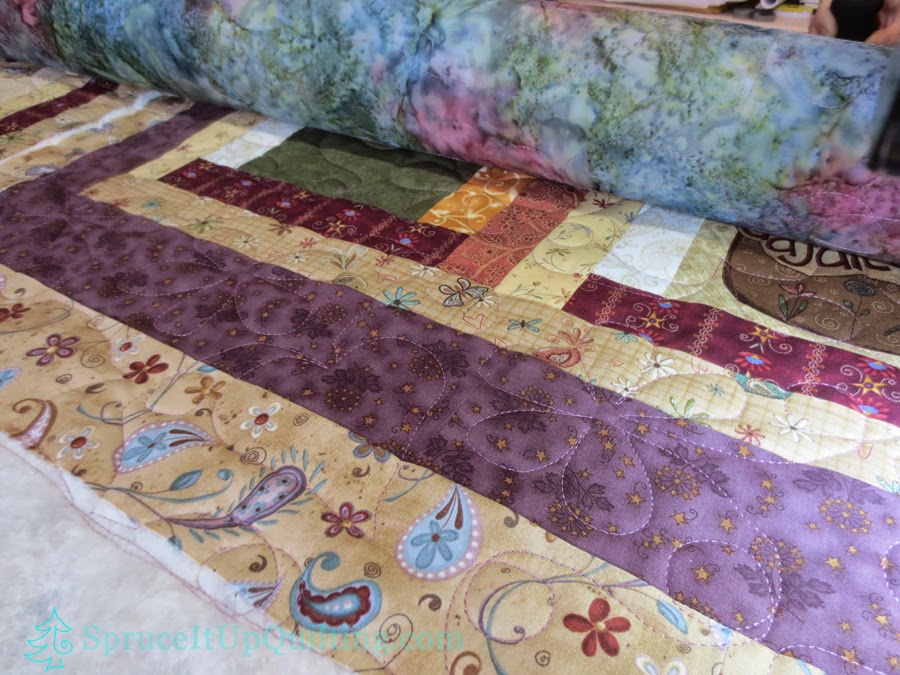 This pantograph is called Hearts in Bloom... it's been quite popular because of the easy design and the open quilting. This fabric has the same flowers in it. 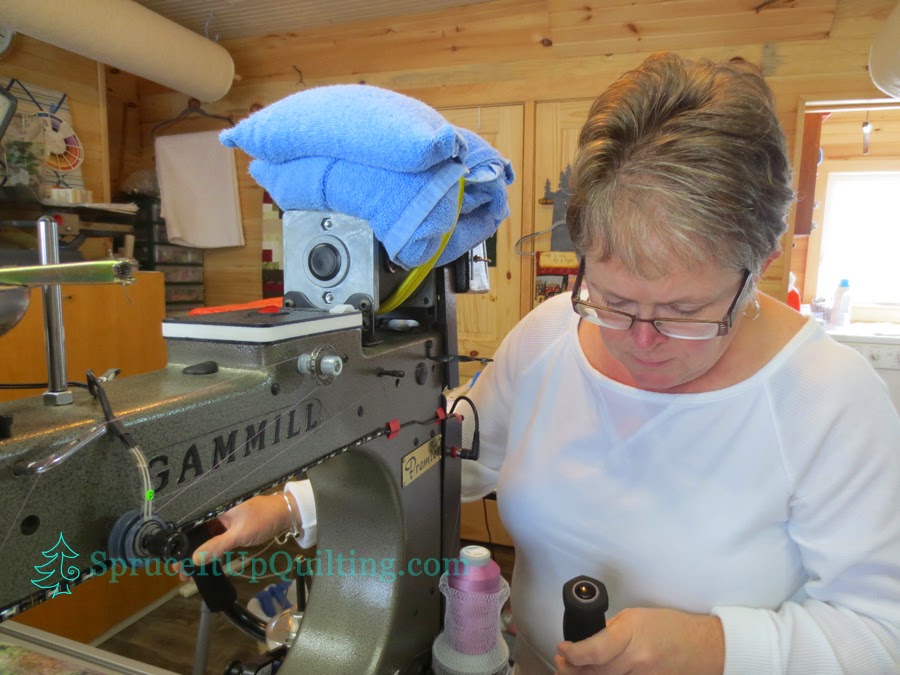 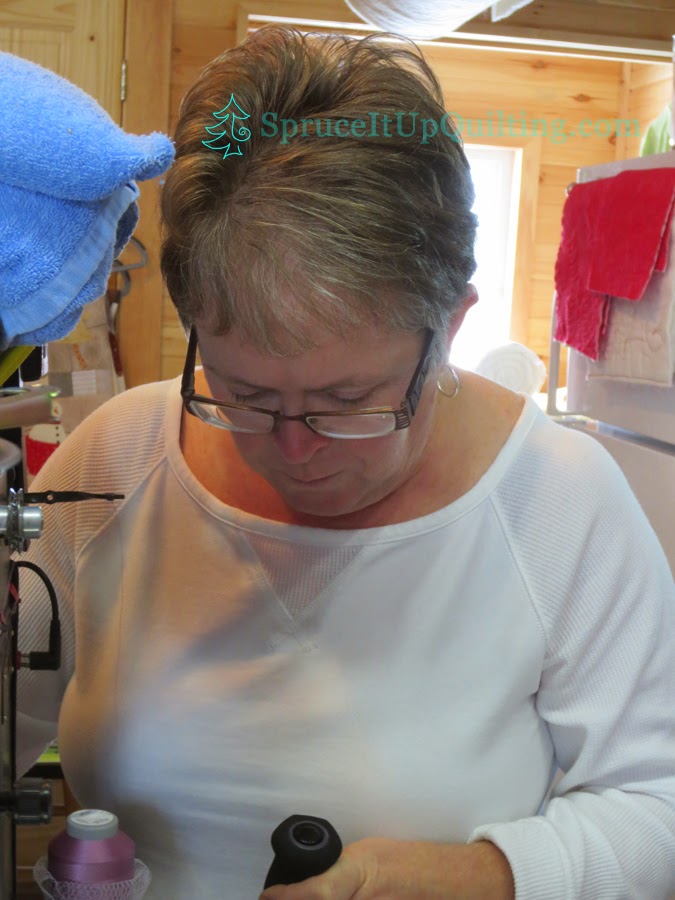 Once the panto work was done, Hollie decided the third quilt would be done freehand. 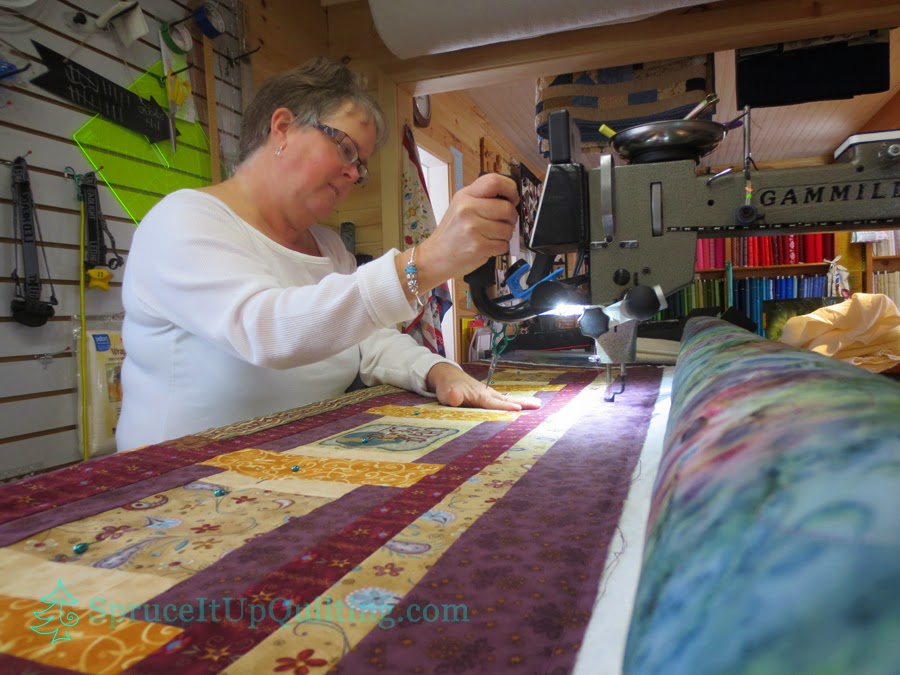 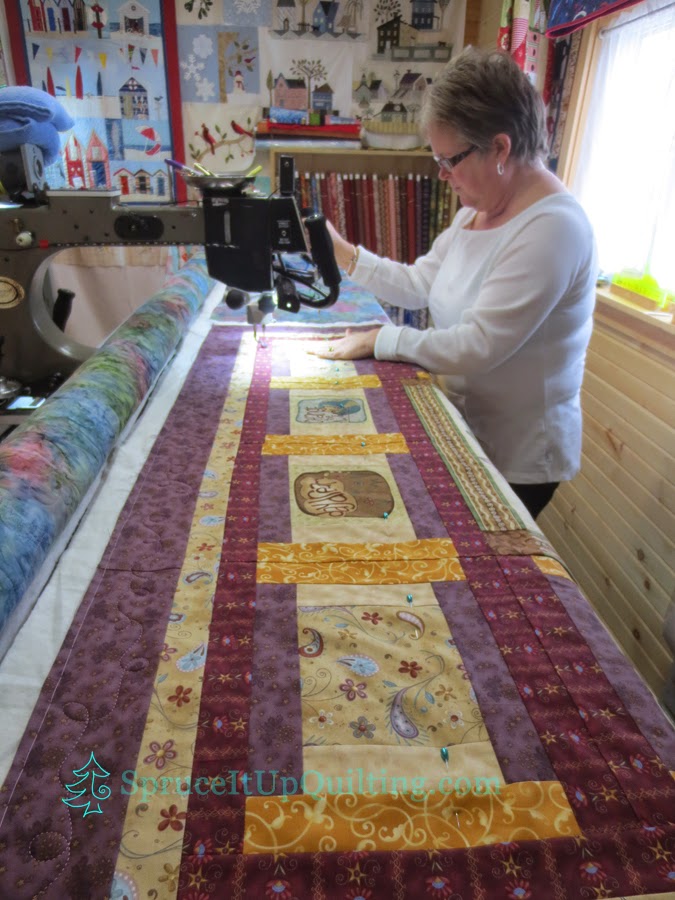 This is where Hollie is most comfortable... 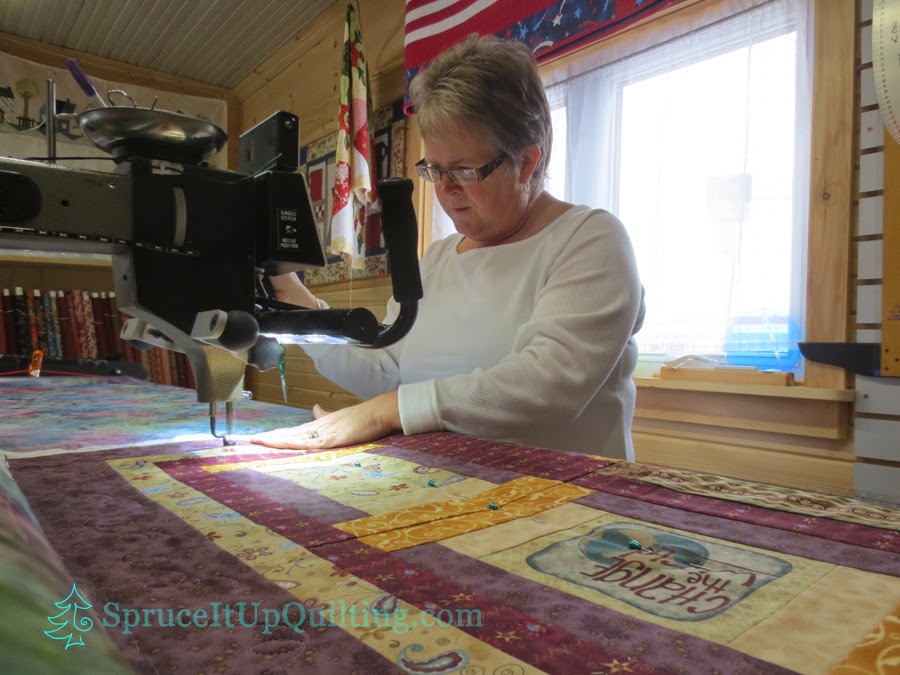 She even wrote in the "blank" blocks... 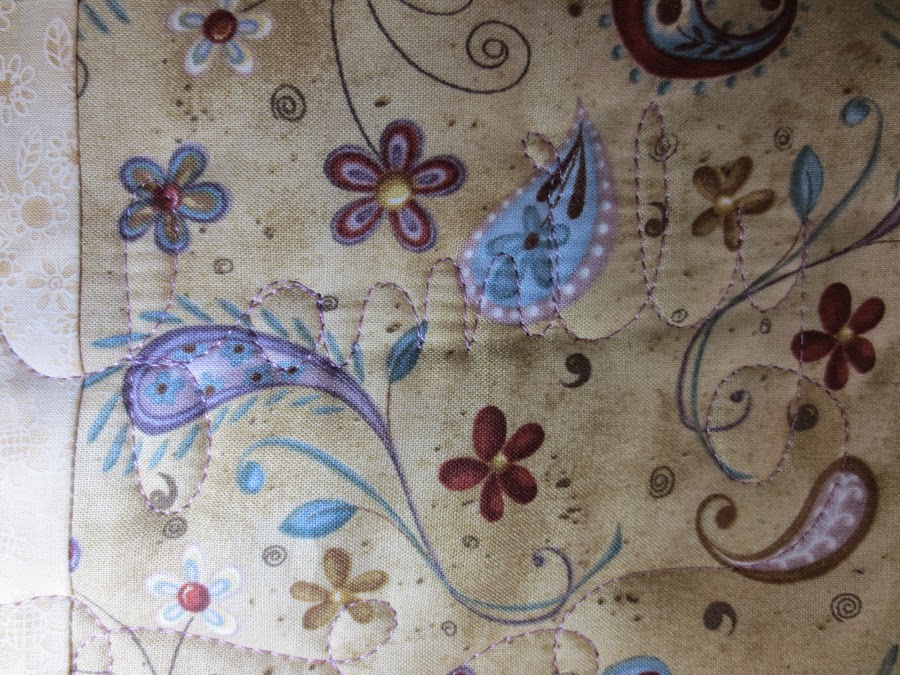 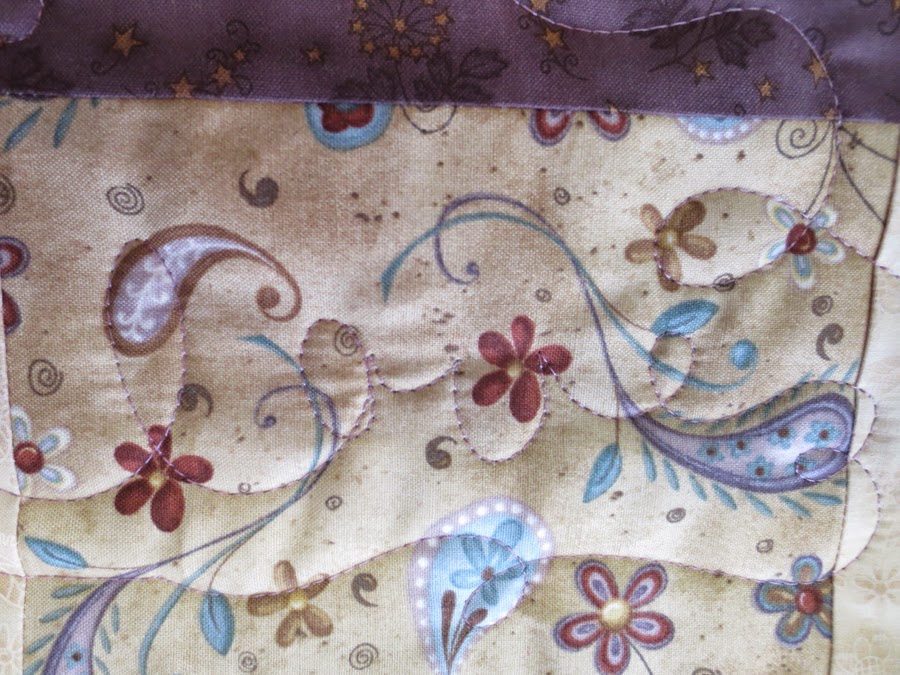 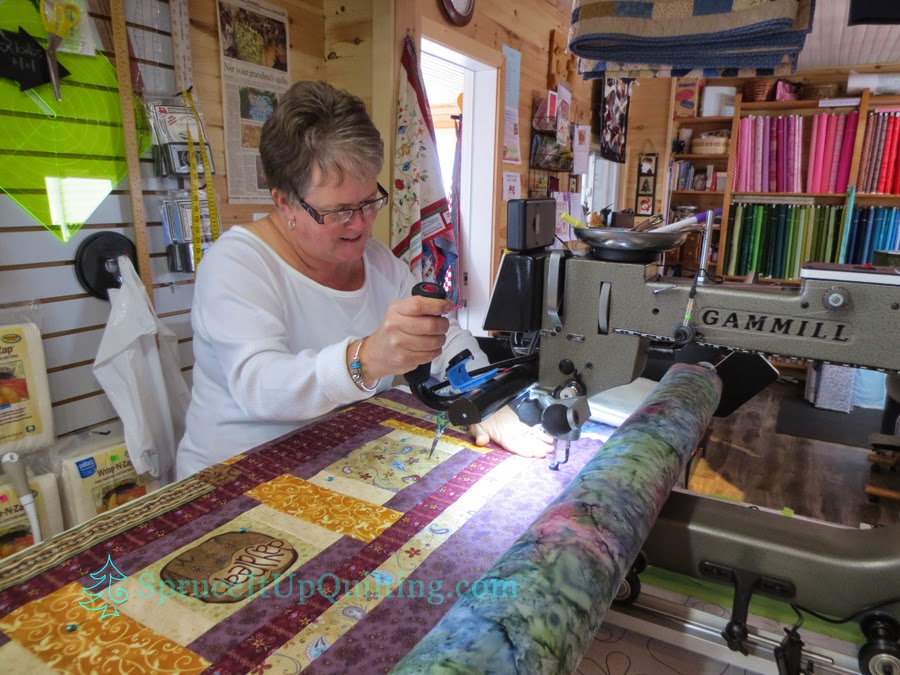 What a sharp eye she has for transforming a simple panel into a wonderful keepsake quilt!! I absolutely love the log cabin setting. 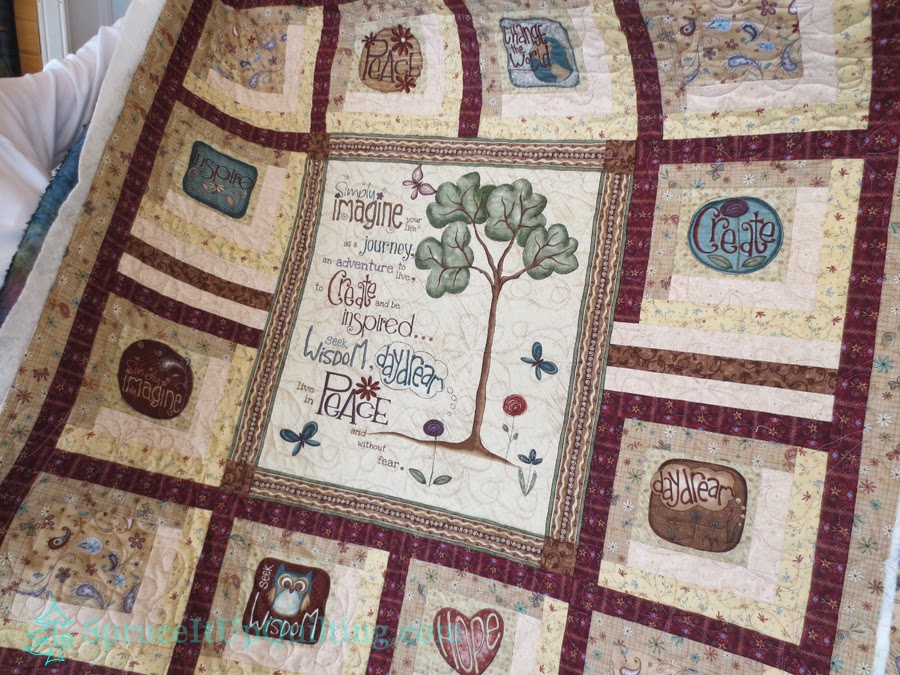 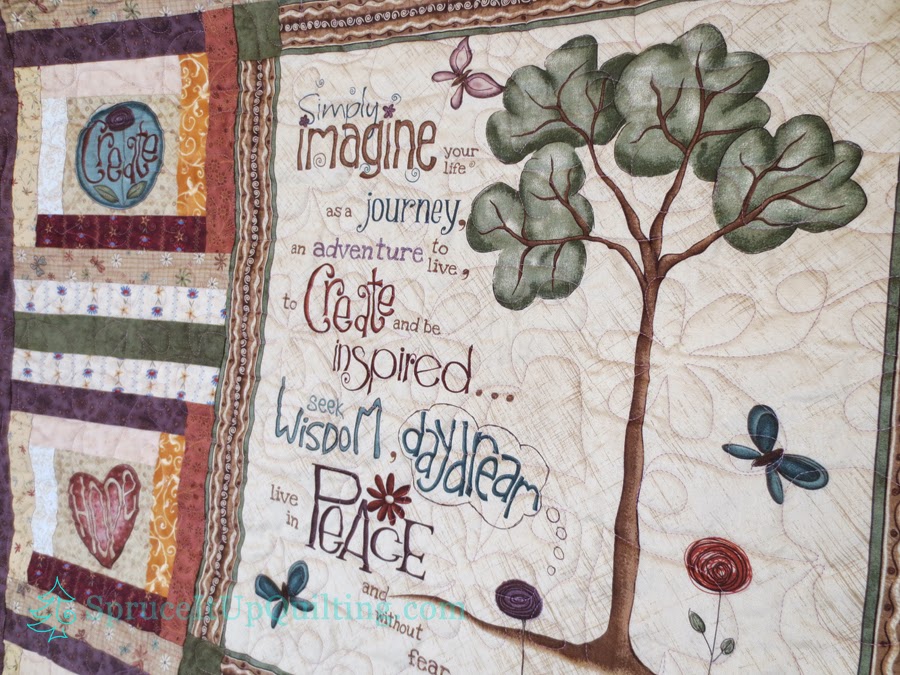 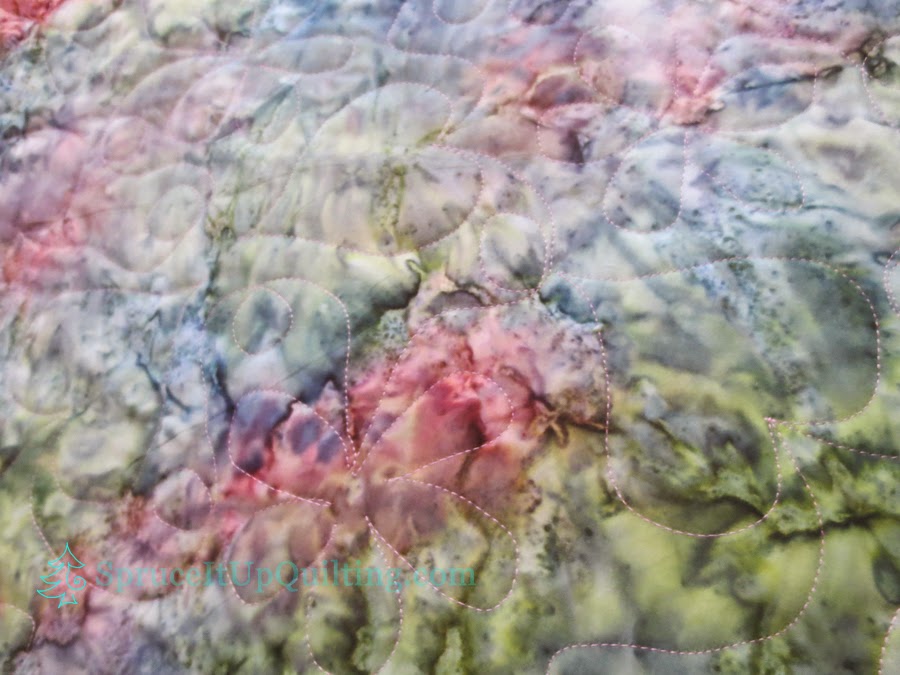 Hollie you amaze us all! Can't wait to see your next three quilts... 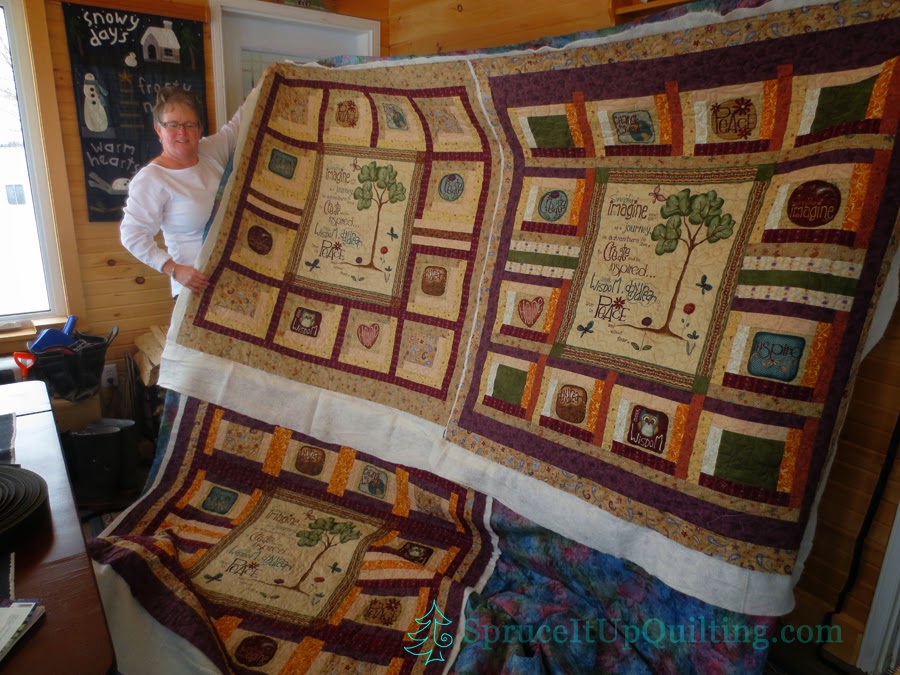 Simply Imagine what YOU can do on Lolah!!! Call us and book your date!

Hollie reminded me yesterday that I forgot to include an important photograph because the photo was taken with my phone. 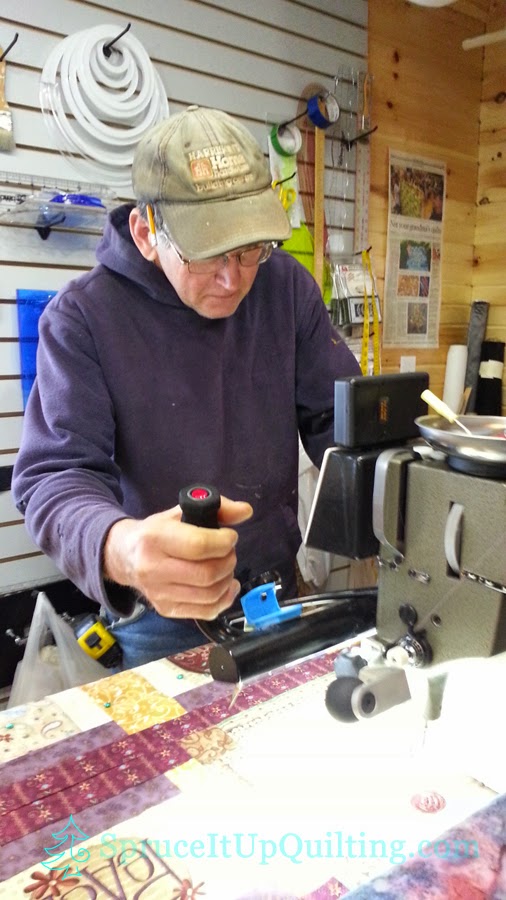 Blair is a good friend of Hollie and Micheal and our contractor who happened to come in while Hollie was working so she asked him to quilt on her top...

Blair has been known to mark his wife Sally's tops for hand quilting. He is skilled at hand tools so it was no surprise that he did well. Sorry the Lolah's light is too bright to see what he quilted!

Thank you for the reminder Hollie!