Before I launch the next session of Lolah's friends, I want to tell everyone that there are still a few ornaments left to purchase... hurry... go have a look and make your donation today. You can call me to reserve yours or email me your request! I'll set it aside for you! PLEASE!!

I first met Hollie in the summer of 2013 at the Lupin Quilt Fair & Sale. I purchased 7 quilt tops and several were Hollie's. As the show was drawing to a close, I went to pick up my purchases; Hollie came up to me and introduced herself. I love her work, she's an expert piecer and she has a great sense of color. We seem to like the same fabrics/colors/scrappy look.

If you've been to the shop in the last few months, especially if there was someone on Lolah, you might have met Hollie. She is a local crafter who grew up in the area; she's very productive and sells her crafts at many local shows and at the craft shop in her village.

Hollie is a dedicated hand quilter. I remember the first time she came to visit the shop and she looked at Lolah with skepticism. Not her thing! As she worked with those who came to quilt on Lolah, she became anxious to try her hand at it. Soon she was so excited to try Lolah that she even dreamed about what and how she would quilt.

She came armed with 3 lap-sized quilts... not shy at all about the process! Her first quilt is called: To Ryan; she chose wool batting and FilTec's Citron Yellow Glide Thread, a perfect green color thread that seems to glow in black lighting.

We turned the overhead lights off, turned on Lolah's black light. She quilted this quilt in no time at all. 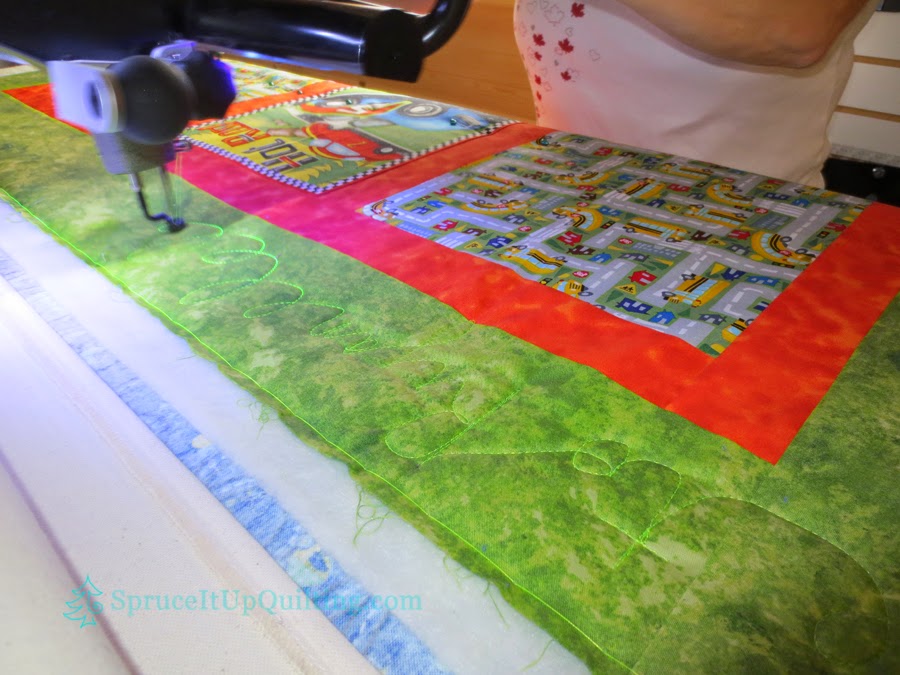 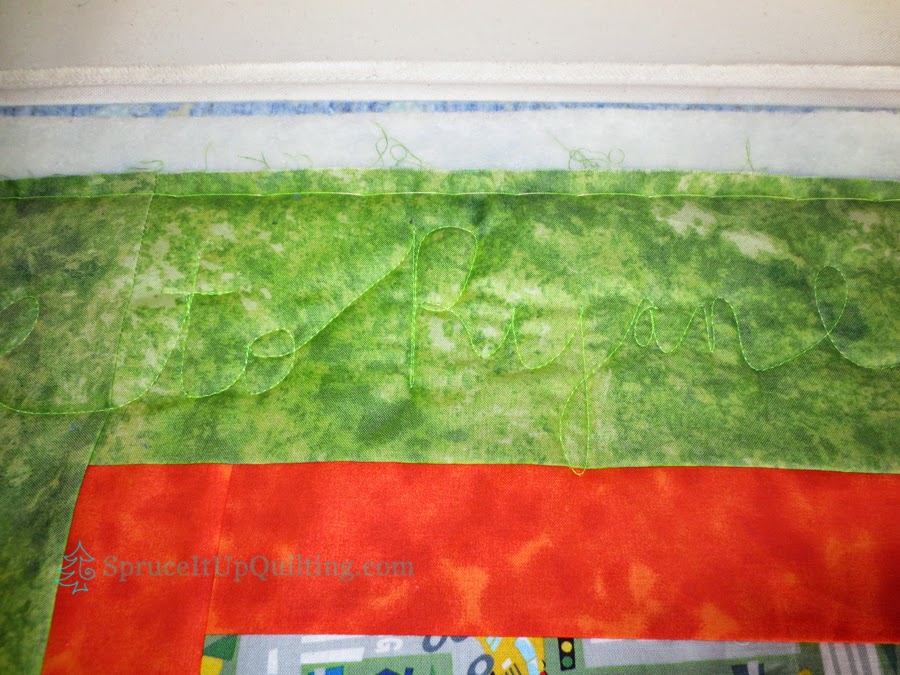 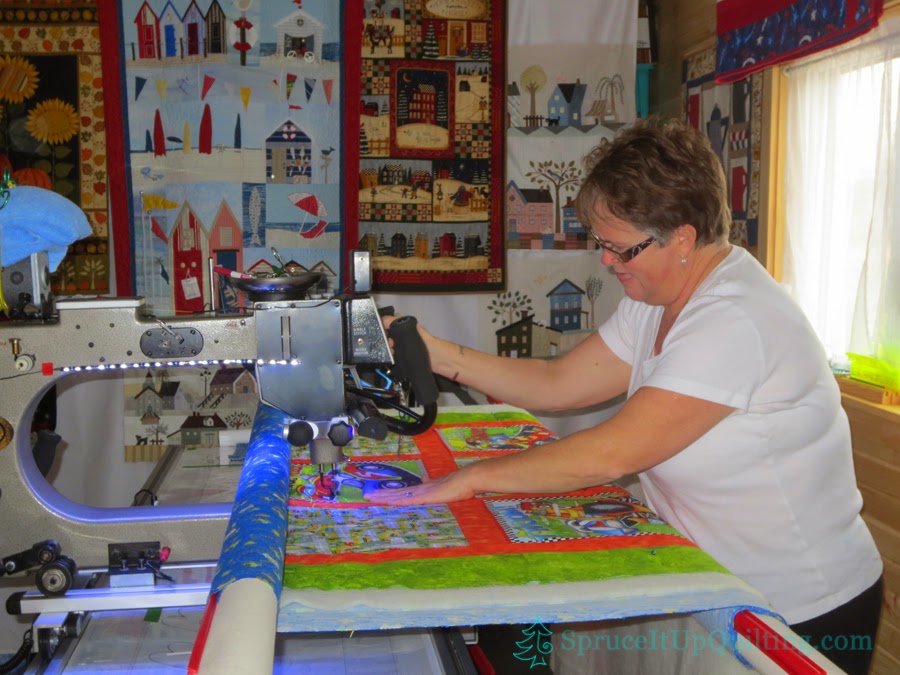 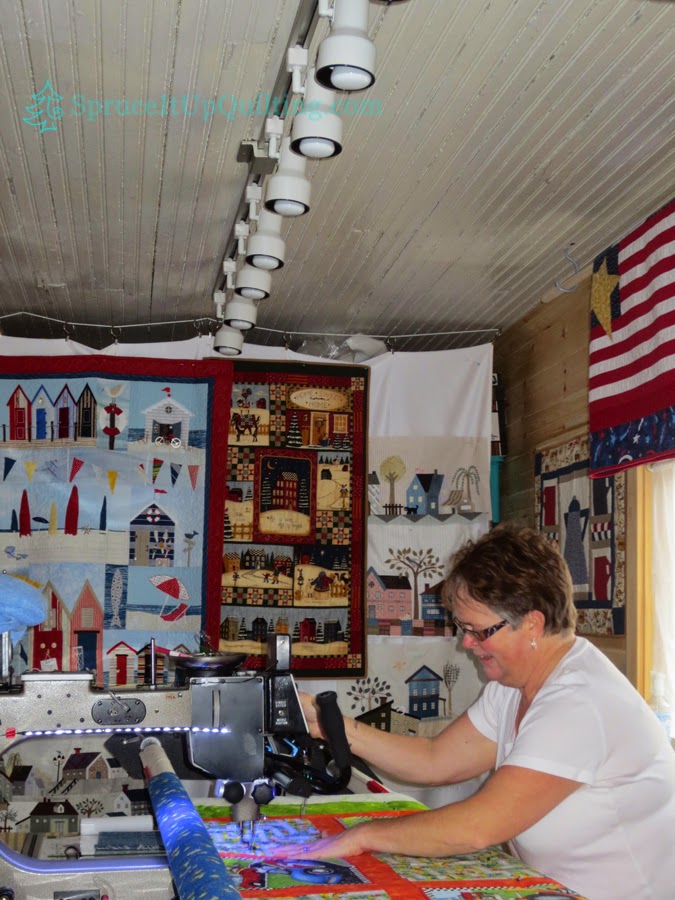 Sweet... Hollie is looking for a black light for Ryan's room! How cool would that be for a little boy to sleep under a glowing blanket? 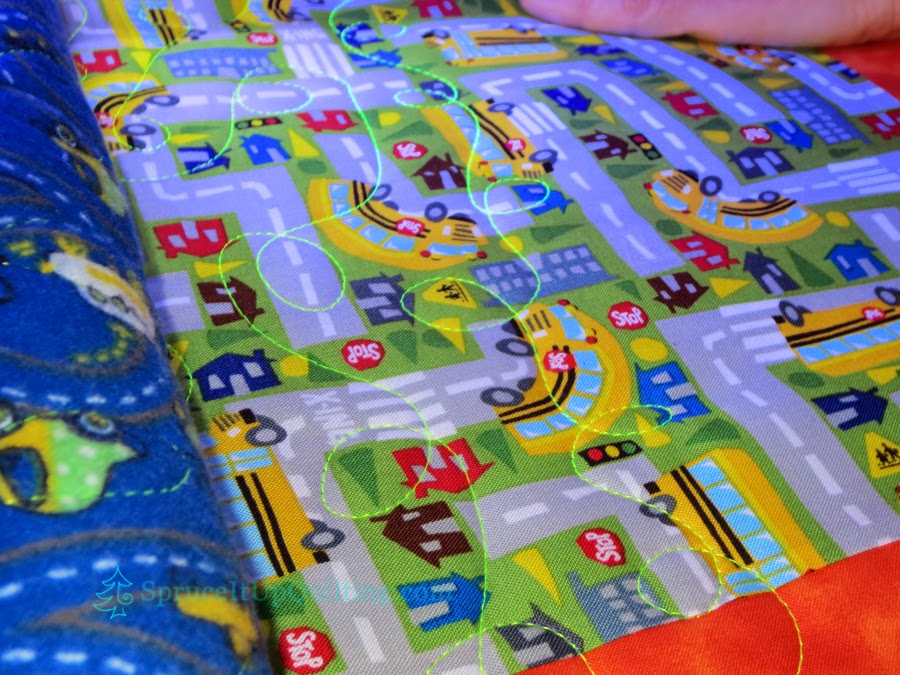 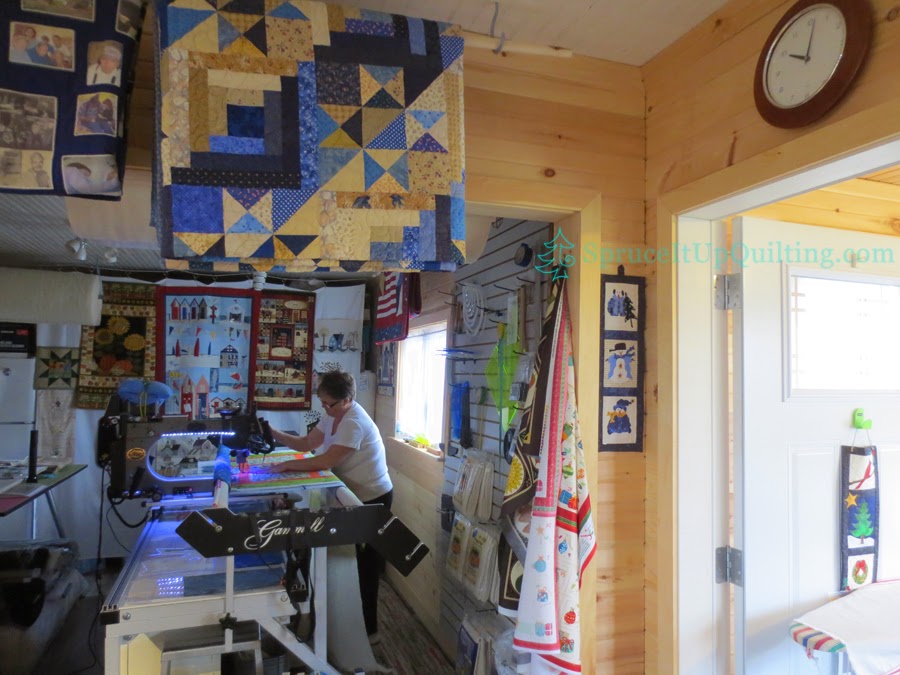 The backing is flannel. 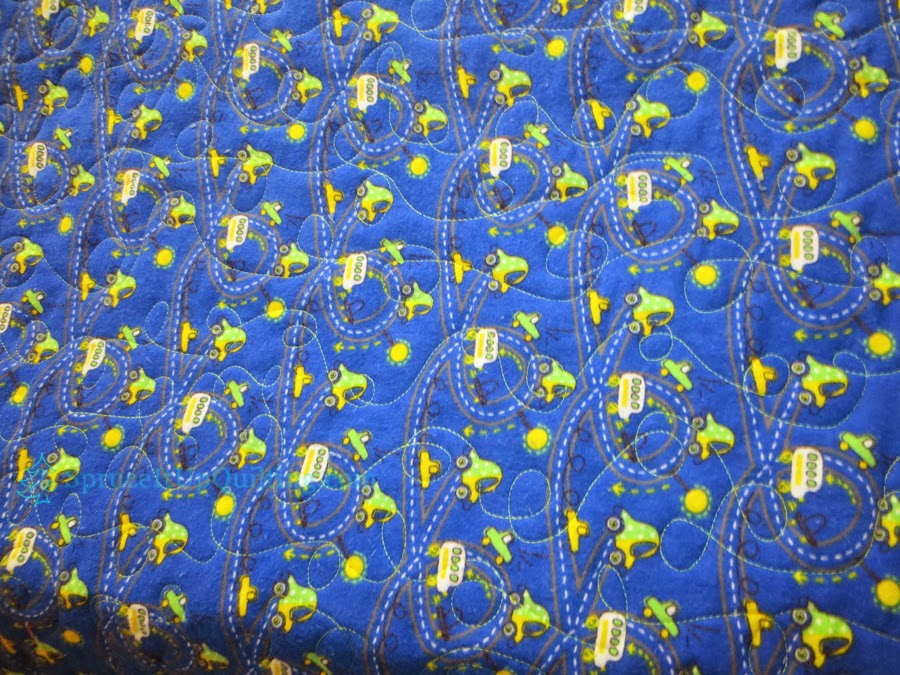 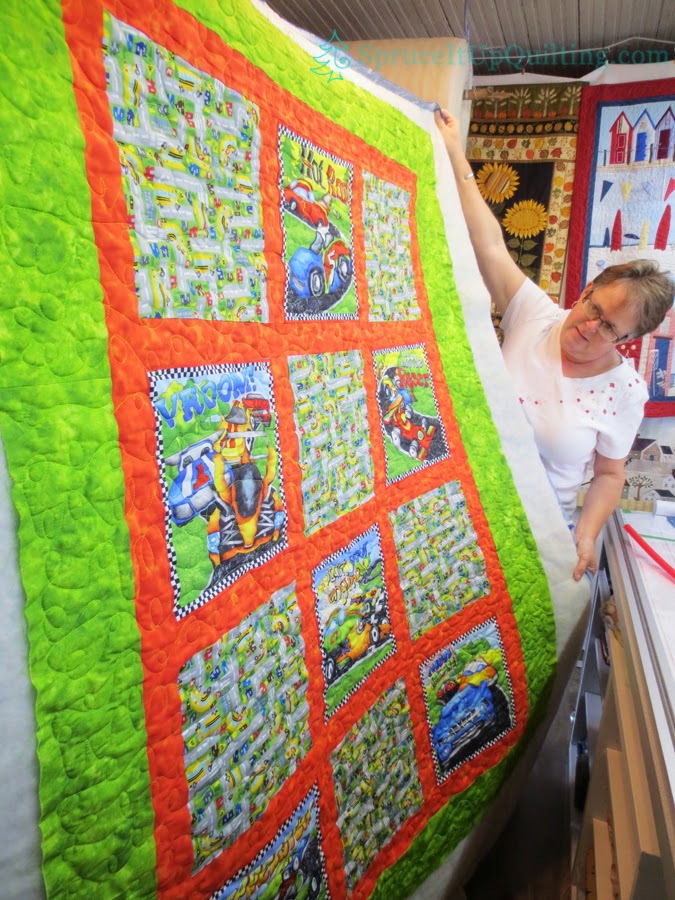 What a lucky little boy! 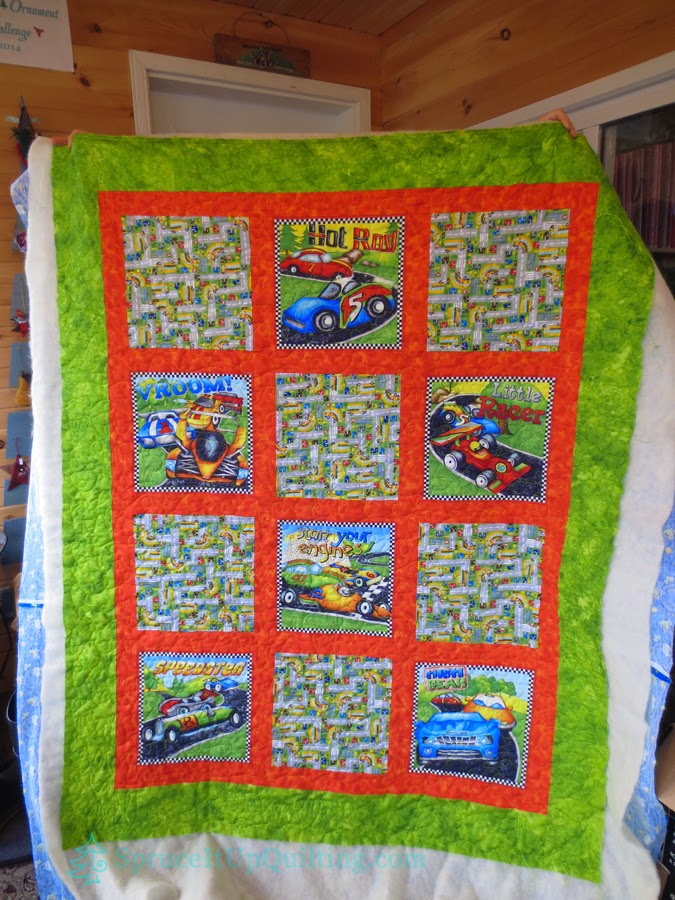 Wasting no time, we loaded quilt no 2 and then the shop got busy. I don't have pictures of Hollie quilting on this one but we have the finish.

Quilt no 2 is a gift for her mother-in-law for Christmas. This one also has a wool batt and it was quilted with FilTec's Mango Glide thread.

Beautiful birds on this fabric... all free-motion quilting. Did I tell you that Hollie prefers free-motion to pantographs? She has tried her hand at the latter and she doesn't care for it. 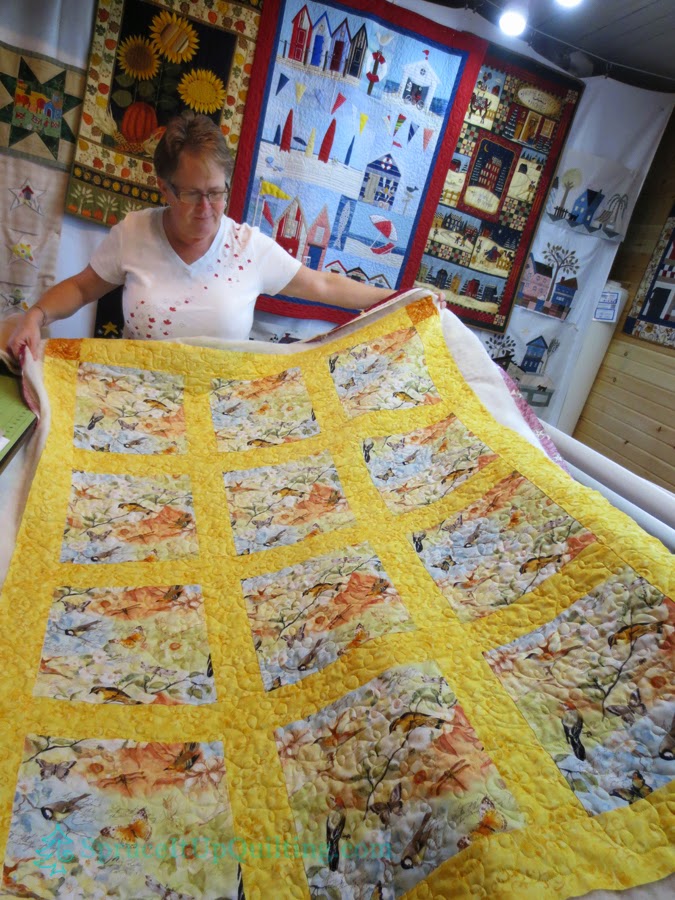 The backing for quilt no 2 is this gorgeous Christmas fabric... I spot a butterfly... the thread looks gold on the backing! Very good choice Hollie. 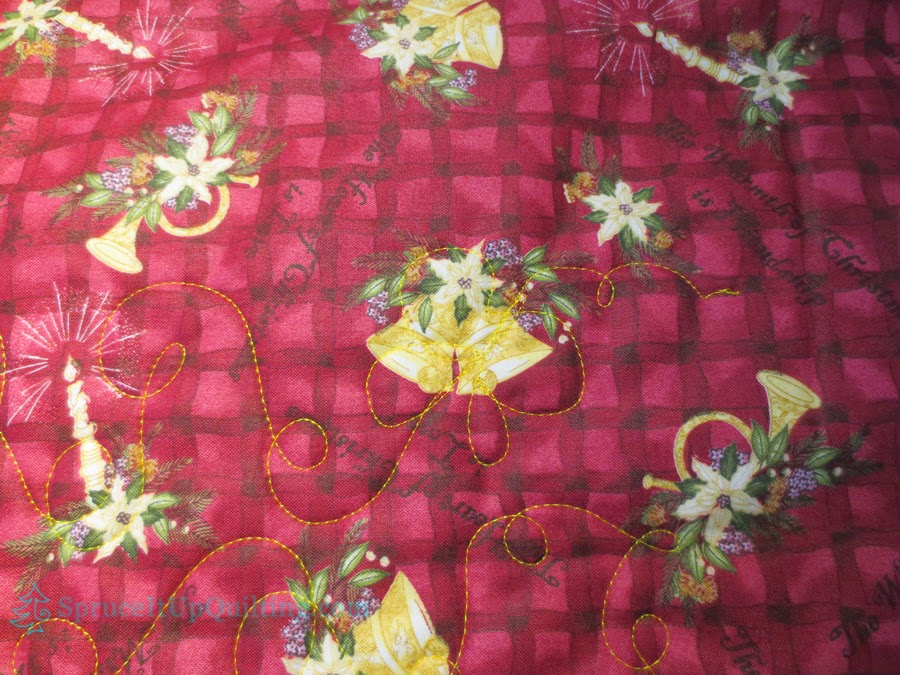 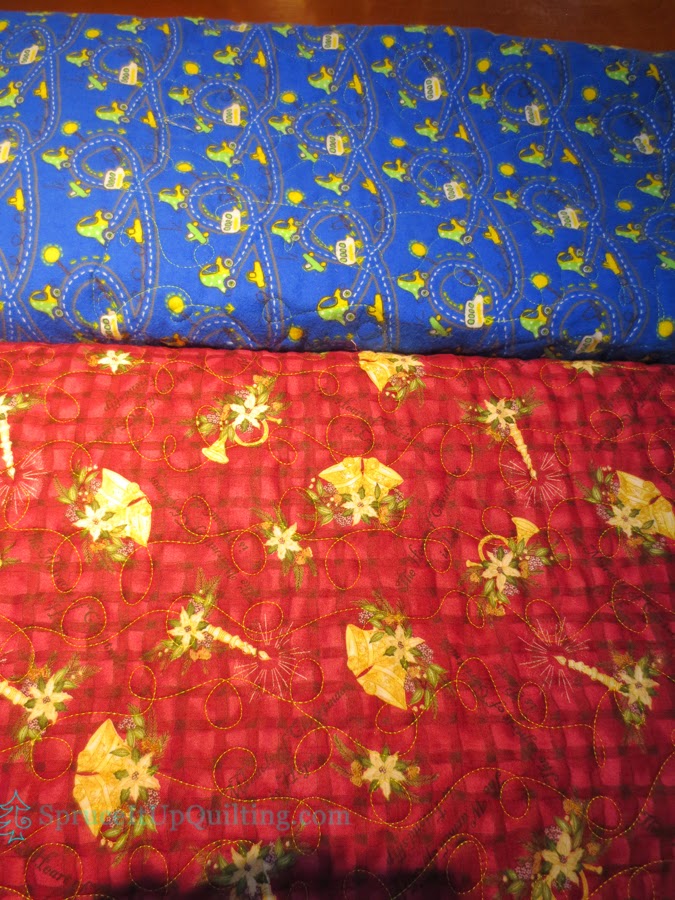 By the time she finished the second quilt, it was 11:30 am and lunch time. Customers were still in the shop and after they left, we loaded top no 3. This is a Santa panel to which she added a series of borders pulling fabrics from her extensive stash to coordinate with the colors in the panel... very clever. I recognize some, drool over others. 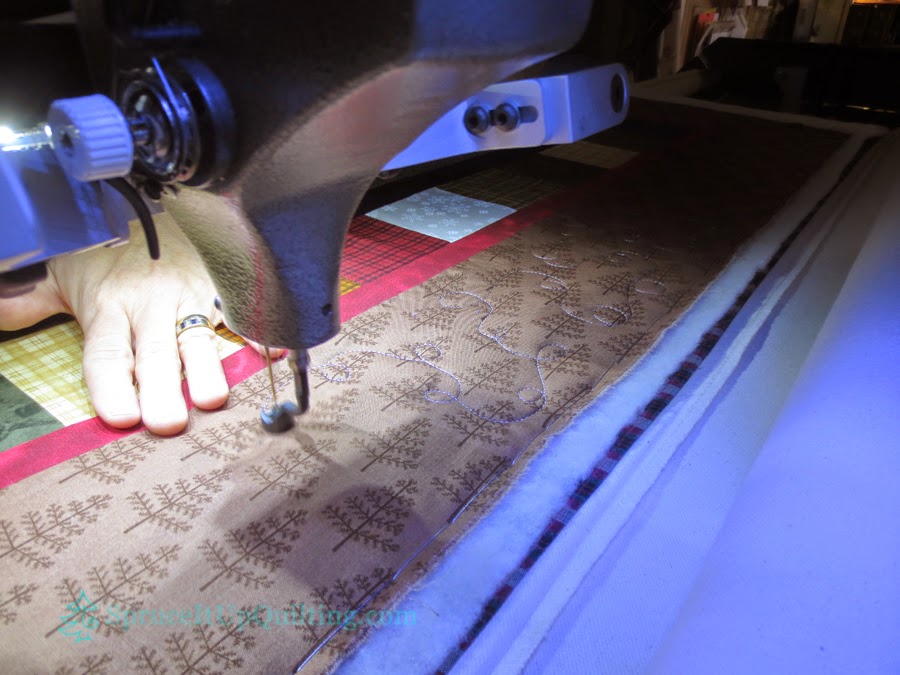 Hollie brought this panel to the shop one day to find the right fabric for the outer border. This tree fabric was perfect. That day, I thought the panel looked familiar... I reached on one of the shelves under Lolah and took out my Santa panel... exactly the same! No wonder I like her fabrics! 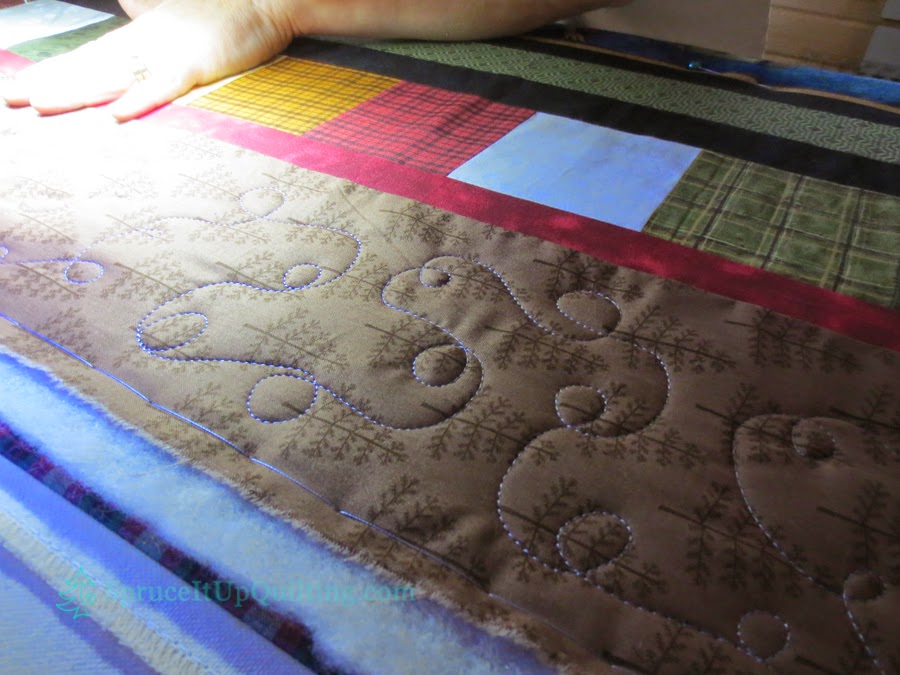 We turned out the lights again... wool batting made these quilts so soft... this time she used FilTec's Graphite Glide... the color name sounds grey but it looks blue on this quilt. 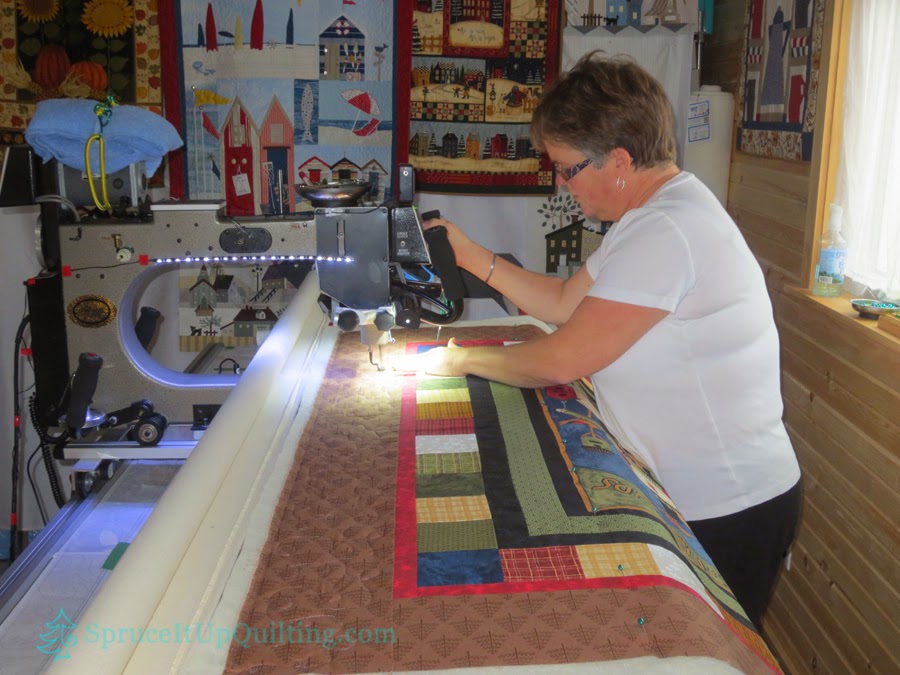 I took the following picture to record her start time... 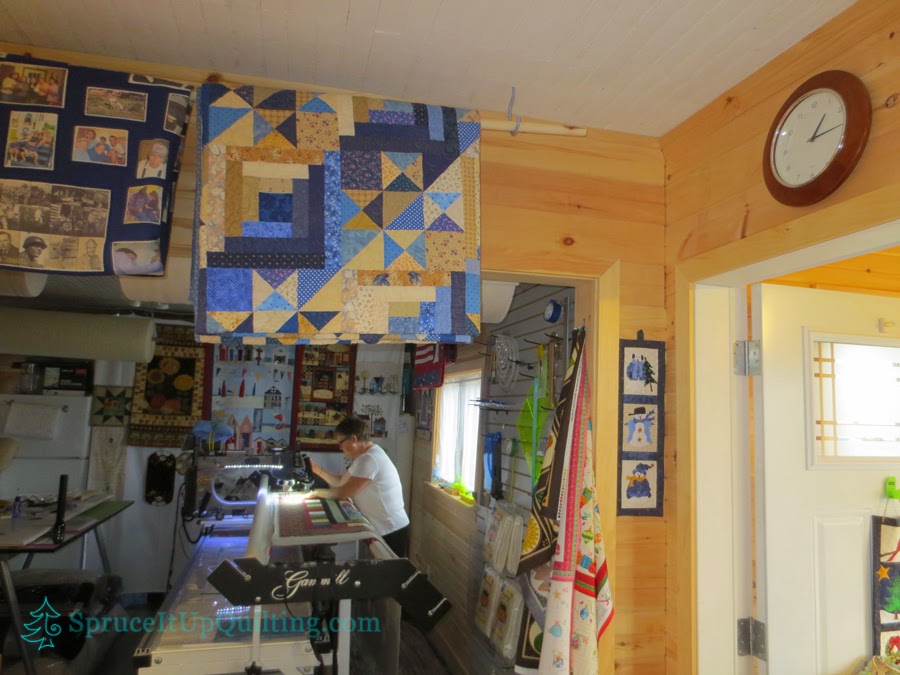 Hollie was anxious to try some ruler work... as a hand quilter with years of experience, she has developed a sense of how she will quilt the top she's working on. That is a big help when it comes to working on a longarm. Here she's quilting it the same as what she intended to do by hand. Only it took her less than 2 hrs instead of a week. 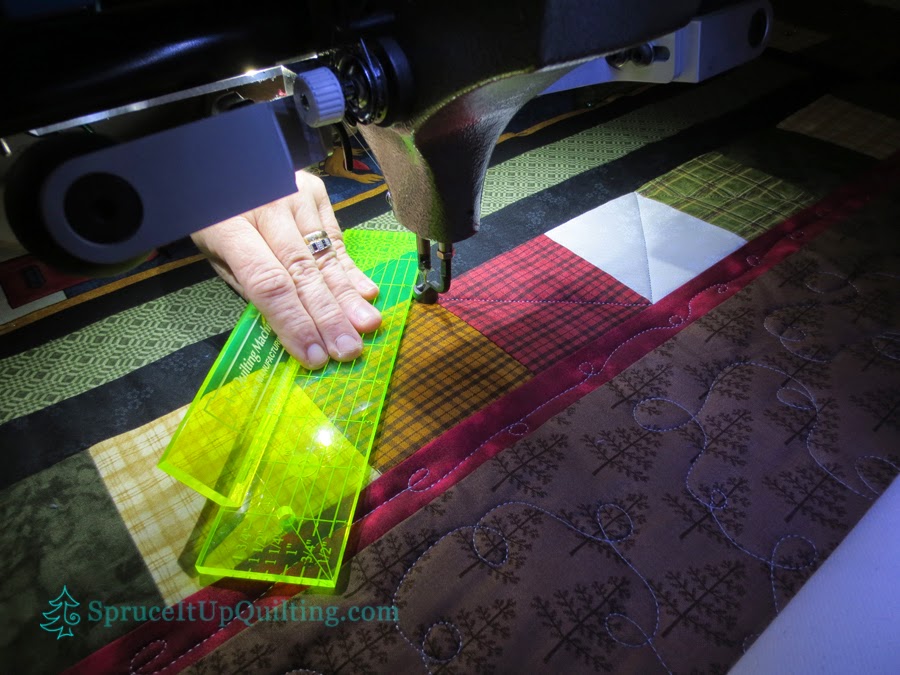 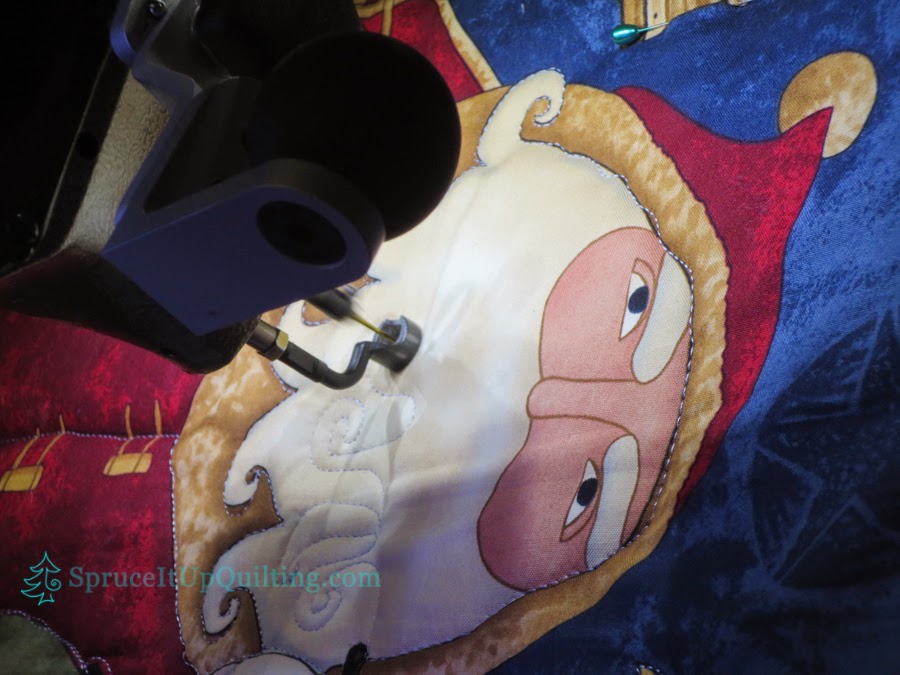 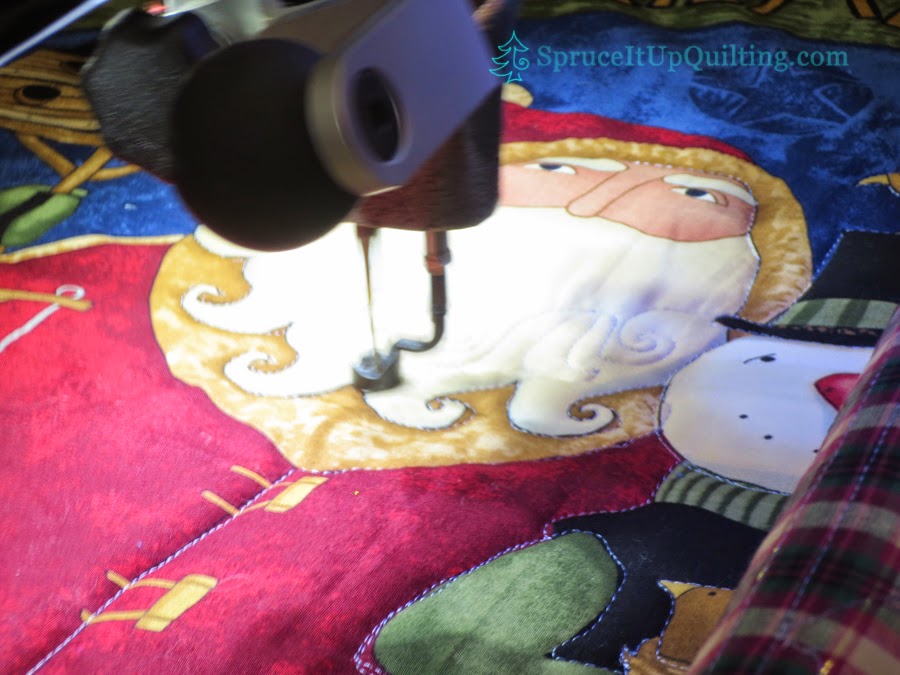 There was a lot of rolling back and forth to work around the quilt which is much easier to accomplish with a helper. 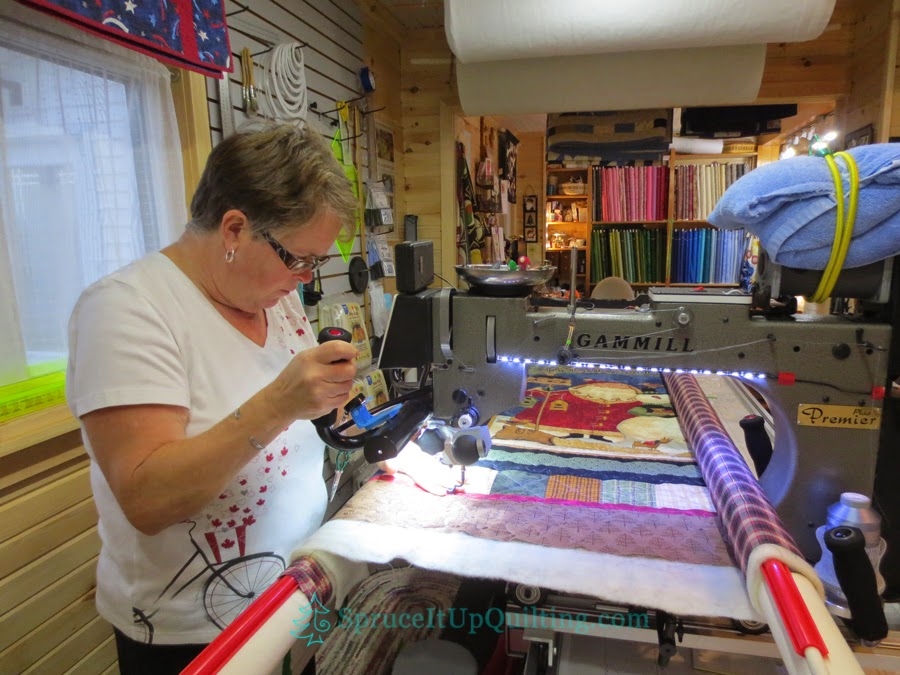 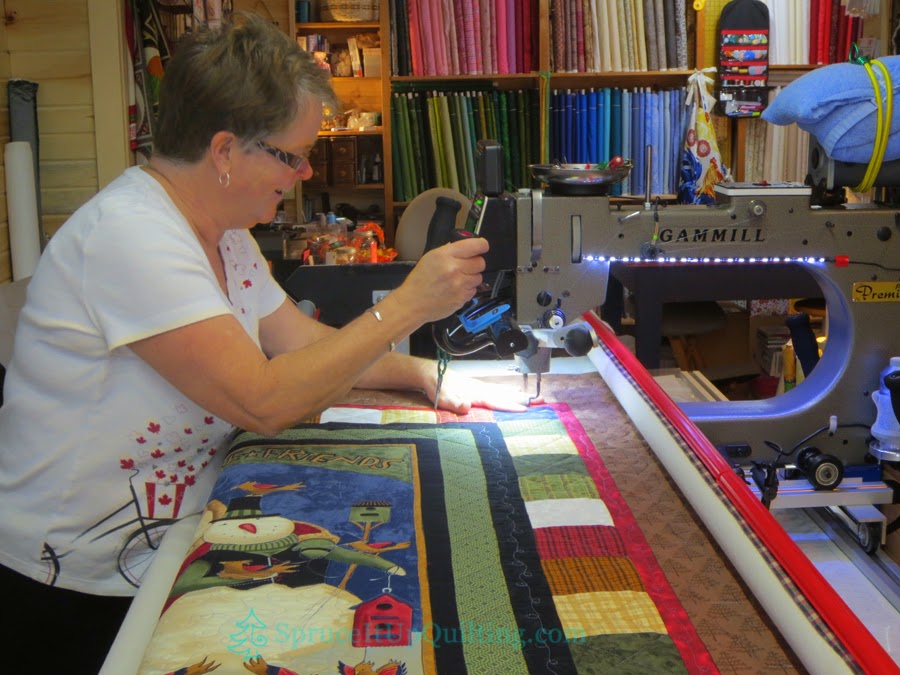 Hollie went looking in her stash and found this plaid for the backing. She's made it a point to use up some of her stash and made a pledge to refrain from purchasing ANY fabric in 2015!! Now I couldn't do that!! 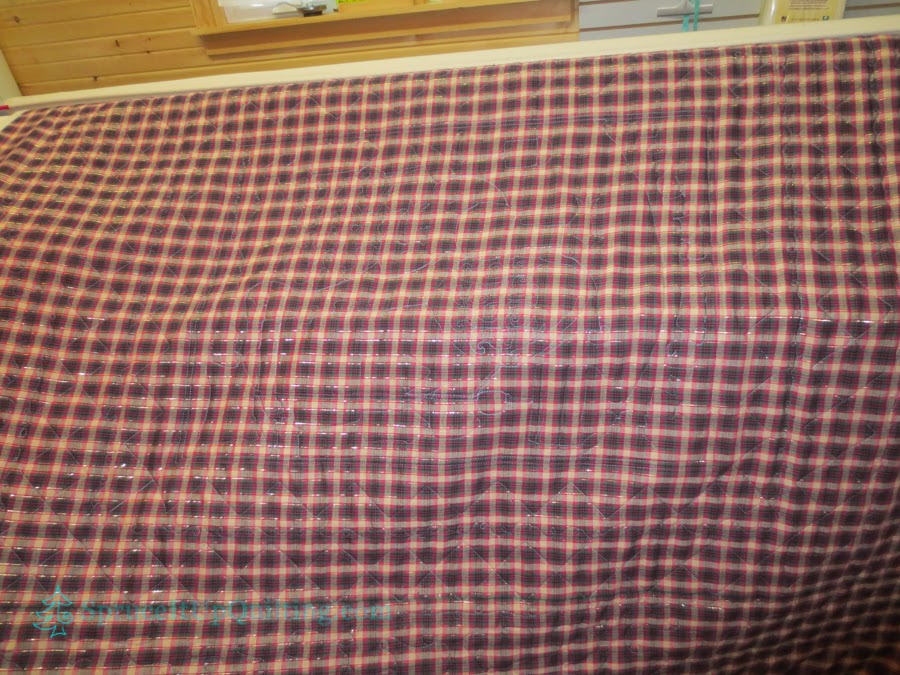 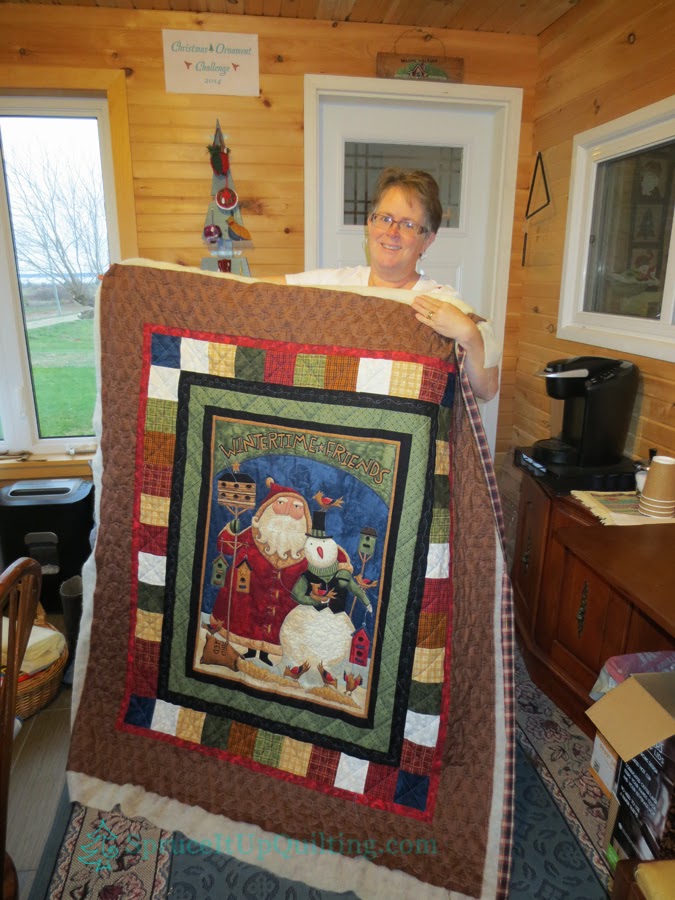 All the time she was quilting, she was dreaming of her next session... stay tuned for her second visit! Didn't I tell you she was productive? I wasn't joking!

Lorette
Posted by Lorette at 6:35 AM