Last week, I finally got down to trying the Quick Curve Ruler by Jenny Pedigo at Sew Kind of Wonderful that I purchased several months ago. I wanted to make the Metro Waves quilt and thought I could just cut out the pieces and start sewing. 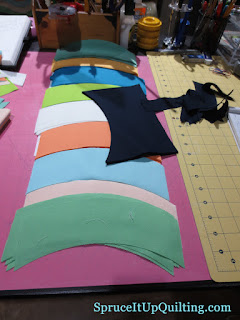 After watching her video on cutting and sewing, I quickly realized that her pattern must have more parts than just these curved pieces! So I ordered the pattern.

Her pattern is so well explained and has great illustrations both for cutting and sewing. BUT... I had already cut out all the fabric! What to do?? 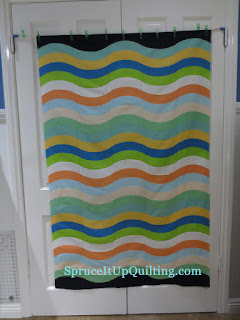 I decided to wing it and sew what I had cut and forget trying to fix my mistake. It took a lot of pinning! I'm not as brave nor as skilled as Jenny is to sew these curves without pinning. AND I didn't want to have to trim these later either so I tried to be as precise as I could.

Jenny sewed her Metro Waves strips all facing the same direction which is beautiful! I wanted the strips to be waving! I have the side borders (another beautiful Kona Solid in Indigo) to add then it'll be ready for Lolah! Have you met Lolah? You will soon!

I chose this Robert Kaufman Fusions for the backing. It's luscious! 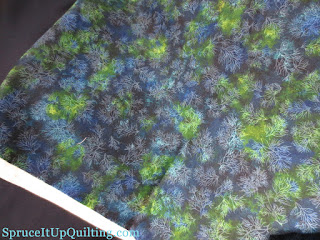 Now time to get back to the sewing room!

Email ThisBlogThis!Share to TwitterShare to FacebookShare to Pinterest
Labels: quilts